As promised, back to New York City…

The second day of our New York vacation, we decided to visit Lower Manhattan and take in all the relevant sites. It was a nice change from the super crowded streets of Times Square. The sun was shining and there was a cool breeze coming off the Hudson – it was the perfect afternoon.

The first stop was the Statue of Liberty. Unfortunately, all the tickets for the interior were sold out and it didn’t make any sense to pay for a boat ride to the base where the view would be terrible, so we opted for a free ride on the Staten Island Ferry. 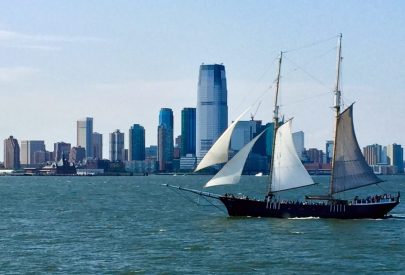 The ferry didn’t come close enough to Lady Liberty and all my pictures were fuzzy at best. A bit disappointing, but the views of the harbor and city were spectacular on the way back.

After the relaxing, albeit chilly, boat ride, we wandered all over Lower Manhattan. One of very first unique buildings you come across is the national landmark, Fraunces Tavern, in operation since 1762!

Following the evacuation of British troops from New York in late November 1783, George Washington bid farewell to his officers on December 4th from the building’s Long Room. We stepped inside for a quick look around and it was as if we stepped back in time! I only wished we could have pulled up a large over-stuffed leather chair to the roaring fireplace, swig back a brandy and smoke a cigar… maybe next time.

I know it’s a bit cliche and an extremely touristy thing to do, but I really wanted to see the famous Bull Statue of Wall Street. The stock market is another passion of mine. I have been the family money manager for the past five years and have been overseeing our multiple retirement accounts. I must toot my own horn, for being self-taught, I’m not doing too shabby; and the expensive management fees are averted (except for my weekly Starbucks binges – after all, a girl’s got to have her Bucks!)

For some reason, we ended up walking in circles trying to locate that damn bull! The boys wanted to give up, but I pressed on. In the process we discovered some other great sites along the way; like the beautiful Episcopal church. Established in 1696, Trinity Episcopal Church stands out like a beacon smack at the end of Wall Street, against its contemporary neighbors. 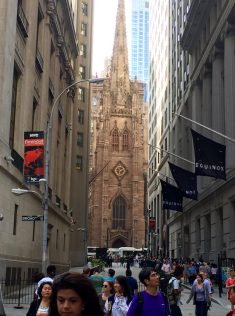 We also stumbled upon the famous Delmonico’s restaurant. Established in 1837, it is the birthplace of the widely imitated Delmonico steak and is credited with being the first American restaurant to allow patrons to order from a menu à la carte and the first to employ a separate wine list. I think they were on to something!

“I Got That Bull by the Horn”

Once we saw the New York Stock Exchange, I knew we were close! We asked a young man in a suit that looked like he might work on Wall Street if he could point us in the right direction. We finally found the statue about a block ahead surrounded by tourists. I eventually needled my way in there and B got the shot. Whewww… Now we could carry on.

The last and most important stop in lower Manhattan was visiting the 9/11 memorial. We spent quite a bit of time there, each one in our own thoughts, taking in the true magnitude of what happened on that day. It’s the “Where-were-you-when-Kennedy-was-shot” equivalent for my generation. And I’ll remember that day with clarity for the rest of my life. Seeing the space in person is truly something every American should do. It will have a profound affect on you. 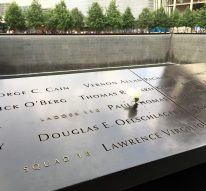 This post is dedicated to all of those who lost their lives on the fateful day. May you find peace. God Bless.