After 7 days in the hospital I was good to go home at last– to my family; people, fuzzies and friends– to recuperate. With the help of my loved ones, a little red wine and some medicinal herb, I was able to put the past week behind me and heal pretty quickly.

After a week or so at home, the surgical pain was gone and I was eager to get back to painting. Although I was still in a cast, my arm was bandaged nearly straight (approx 90° angle) which allowed me to paint– broader, looser strokes anyway. I managed to work on the farm animal diptych begun in November from the Painting With Attitude class with Nancy Mitchnick. A couple weeks later, the stitches were out and I was freed from the cast. I completed the painting, which my older son has endearingly named, “Barnyard Surprise!”

In early March the “Gang of 4” met up for a luncheon at the BBAC in my honor. It was so great to see my art friends and catch up. The girls brought/made little thoughtful gifts for me — I was so touched! Nancy gave me two metal Milagro pieces; a small arm and a larger hand.

Milagro translates to “Miracle” in Spanish and these small trinkets have been part of Latin American culture for centuries. Traditionally used in religious prayer, a Milagro may be given to a loved one to convey a sense of well-being or well- wishes.

I strung them together with a personal zodiac necklace of mine and added a few extra colored beads to create a new piece.

In addition to the Milagros, Nancy gave me an awesome palette knife and a mini Isabey painting brush! One of my favorites!! Laura brought delicious strawberry preserves for everyone, Kristen painted a mini-milagro canvas of an arm, and Cynthia (who is an incredible dressmaker) hand-knitted a pair of arm cozies for me!! You can see all the wonderful gifts in the last picture — Zoe the cat approved! It was such a wonderful afternoon and I truly feel blessed to have these incredible women in my life!

Our next assignment, and last for me, would be a diptych. Wikipedia defines a diptych as, ‘an artwork consisting of two pieces or panels, that together create a singular art piece that can be attached together or presented adjoining each other’. Earliest pieces were frequently hinged and depicted biblical or religious themes. Diptychs often represent opposition/contrasting objects or elements. A triptych (three panels) might represent a sequence or a change; like those prints you see in stores of the different seasons.

I couldn’t really decide on an idea for the diptych so I went with a picture I’d saved to paint some day. The image is of several farm animals standing together and taken by well-known animal photographer Rob MacInnis.

We worked on our pieces for the next several classes. These were to be our pièces de résistance — our masterpieces! Below you can see a few of the multiple iterations the animals went through as I tried to figure them out.

Unfortunately I wasn’t able to complete the diptych by the end of class term, but I did finish it up in the new year! More about that in my next post. Stay tuned…

Our family visited the Detroit Zoo a few weeks ago and I swear the animals were posing for me! One of our favorites is the giant majestic rhinoceros.  We have two rhinos at the zoo and this day they were front and center.

Male Southern white rhinoceroses Jasiri (“courageous” in Swahili) and Tamba (“strut proudly” in Swahili) arrived in 2005 as the first of their species to live at the Detroit Zoo. Jasiri often shows his playful side by ganging up on his toys while running around the habitat. Tamba is the more dominant of the two and struts around with confidence and intelligence. Detroitzoo.org

Because of the small sized Bristol board I used, the head size had to be reduced in order to fit in the other features. My version below looks a bit more like a juvenile, but I went with it. I love his sweet expression.

Hello again. It’s been a while since I posted. After my last few paintings for others, I wanted to create something for our home. We have a large yellow-golden wall in the living room that begs for an equally large colorful painting. I like to change up my decorative pictures depending on the season and I needed a large spring / summertime image to fill the space.

After weeks of scouring my own pictures and the internet, I discovered this one on Flickr taken by a German photographer; a herd of sheep grazing the hillside at dusk. The vibrant colors and quirky composition grabbed me the moment I spotted it. The colors would match beautifully with our interiors. I know they say Art doesn’t have to match, but I guess I haven’t fully bought into that notion.

The number of sheep became overwhelming for me and I wasn’t convinced that I could get away with the angle. The more I stared at the “gaggle,” the more I saw them standing on their heads! I couldn’t leave it like this — it would drive the OCD in me crazy. I pared down the heard to a manageable size; one that I could have more control over.

Less sheep became even fewer sheep. At one point, my son commented that they look like elephants! Yikes! I love elephants, but that was not the goal! On to yet another reiteration of sheep.

Finally, once I had a much more manageable group of “sheep-like” animals; I began detailing the faces. It was surprising to me if you change one little line that indicates bone structure or move the placement of the ears upward, they look like a completely different animal — think female lion. Below shows the finished painting on our wall. The yellow fields match perfectly!
Baaaaaaaaaaaaaaaa…

For my sweet beautiful niece Courtney who loves wolves.

I love cow paintings! For the past few years I’ve seen them everywhere and wanted to purchase one. But the artist in me thought, “I can do that!” So, I finally took the plunge and created my first cow.

After finding just the right image online I began by priming the background a blue “sky” color. Next I drew in the cow using vine charcoal. Instead of beginning with local colors, I choose to start with the shadow and highlight colors to create a more dramatic effect. I really liked this first phase with the blue nose and eyes – it was very Andy Warhol-esque.

I really wanted to paint this one loose and fast. Well, that’s how she started as you can tell by the the ears and top of head. But along the way, she smoothed out. I reconciled this by realizing that not every aspect of a painting has to, or should be, the same. Right? I mean, that would be awfully boring!

So, just as my boys look in the morning with their hair all dissheveled and moppy – so does my cow. Who knows, maybe she had a rough night! I wanted the focal point to be her sweet face so I went more soft and delicate here. She was a gift for my mom who also loves cows. She already has a new home – over her fireplace mantel – so I can visit her anytime.

This is a pen and ink drawing of our feisty one-year-old kitty, Zoe. I took a close- up photograph of her curled up in one of her favorite spots: her little basket on our counter-top under the warm lights.

I’ll admit it, I love Facebook. Besides keeping in touch with friends and family, I learn so much from interesting sites and people. One of the best uses for the social media site are the incredible shared photographs. They make for great artistic inspiration! This is a popular photo, one that you may have seen before, and perfect for soft pastels.

In Spring 2013 I began taking classes at the Paint Creek Center for the Arts. We mostly do quick still-life studies and I rarely leave with a finished product that I am happy with. However, I have learned so much and it’s always wonderful to be in a room with other artists!

I did this pastel painting at home, in-between classes. Our orange tabby, Bailey Rae passed away in April, just a week after her fourth birthday. She was an outdoor/indoor kitty and tragically met her fate by the garage door. She was such a sweetheart and a large part of my recuperation. I will always lovingly remember her. Rest in Peace baby.

I had spent so much time focusing on the tiny details in my pastel paintings that I wanted to approach the next one differently.  My goal was to paint loosely, relaxed, and quickly. I discovered this photograph in a magazine at the library and I knew it had to be painted! The Mandrill painting is one of my all-time favorites. I love the vibrant colors of his nose, the softness of his fur, and his penetrating eyes, as if he is staring into your soul. And, I had met my goal: this turned out to be the fastest and easiest painting I had done to date!

I love frogs! Especially the bright beautiful Amazon frogs with a multitude of colors. While looking through magazines for my next pastel painting subject, I came across these guys. They nearly leapt off the page as if to say, “Paint us, paint us!” And so I did. 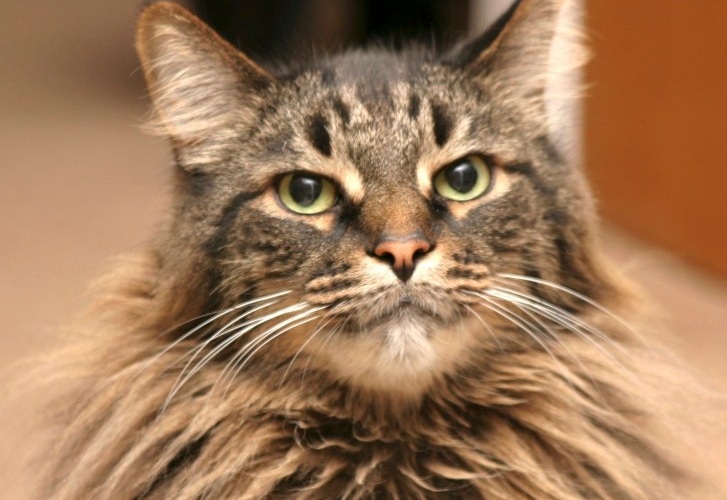 Once I had success with the stippling technique, I was ready to tackle another project. This time, I would go big (literally); the subject was our 35 pound Maine Coon cat Shasta. I love this photo; it captures his tough-guy attitude so well. However, deep down he was a real fraidy cat that loved belly rubs!

Needless to say, this portrait took many, many, many, hours and countless dots. About half way through I questioned my own sanity! Again, I began by stippling the eyes, then the main features, and lastly the shadows and highlights. I finished up by adding a bit of colored pencil to the eyes and nose.